Yet for many years individuals, and to a significant extent companies, have been told that every action matters, not matter how small. 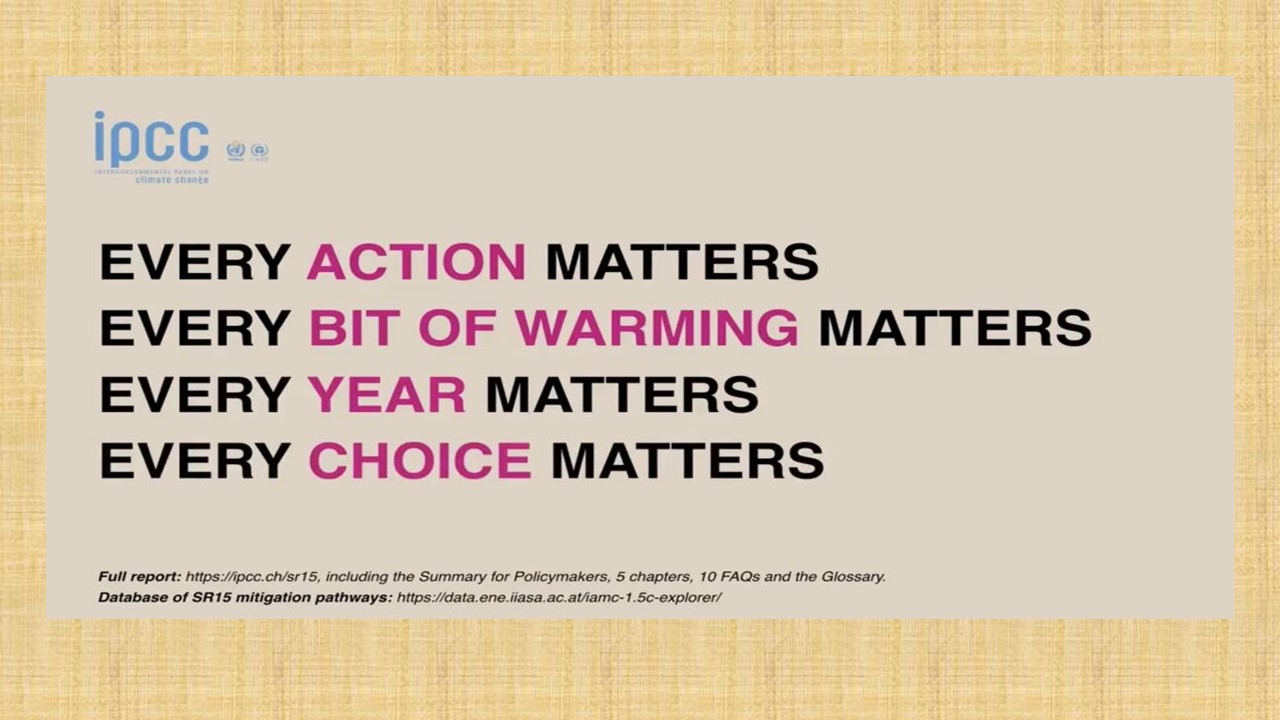 And haven’t we been told that changing the world really is up to individuals?

Yes we have. But Margaret Mead’s famous quote is easy to misinterpret. She is NOT saying that any small group of individuals, acting individually and independently, can change the world. She is talking about individuals creating collective change. She is talking about the fact when Rosa Parks got on a bus in Montgomerty, Alabama in 1955, it was not a random event that happened to spark a movement. It was part of a strategy aimed at delivering collective action.

Telling individuals that it’s up to them to solve climate change may serve some interests, but it won’t get us very far in actually mitigating climate change. The question is what role individuals do have in tackling climate change, and whether individual action can lead to collective action and systemic change. Can individuals materially contribute to the efforts of Team Urgency in playing Climate Chess?

The Yale Project on Climate Communications has been tracking the U.S. population and its distribution across the Six Americas described in the cartoon below, from “Alarmed” to “Dismissive.” Today, more than 100 million Americans fall into the camp of being alarmed or concerned. It’s a remarkable nuumbers, spread across many diffrent constituencies. 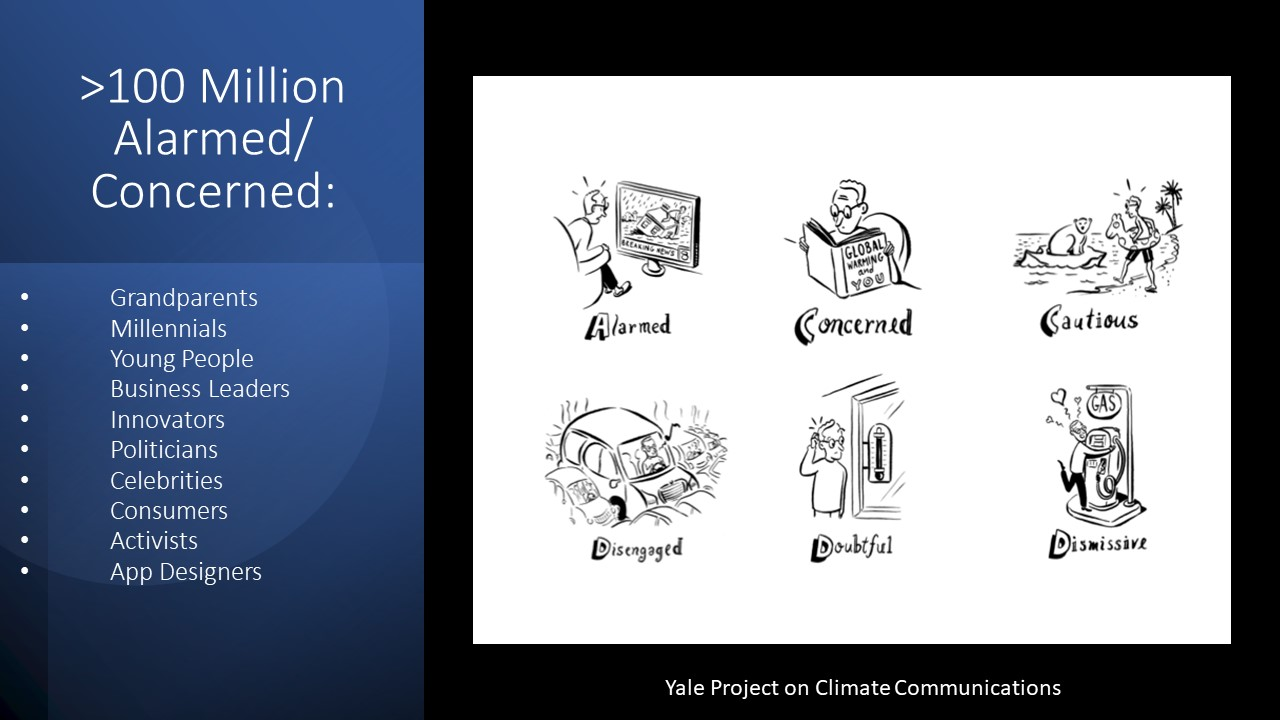 But how many of those people are having the biggest impact they could have when it comes to mitigating climate change. Although the number of 343 is obviously made-up, it points to the very real fact that very few individuals are at “maximum impact.” 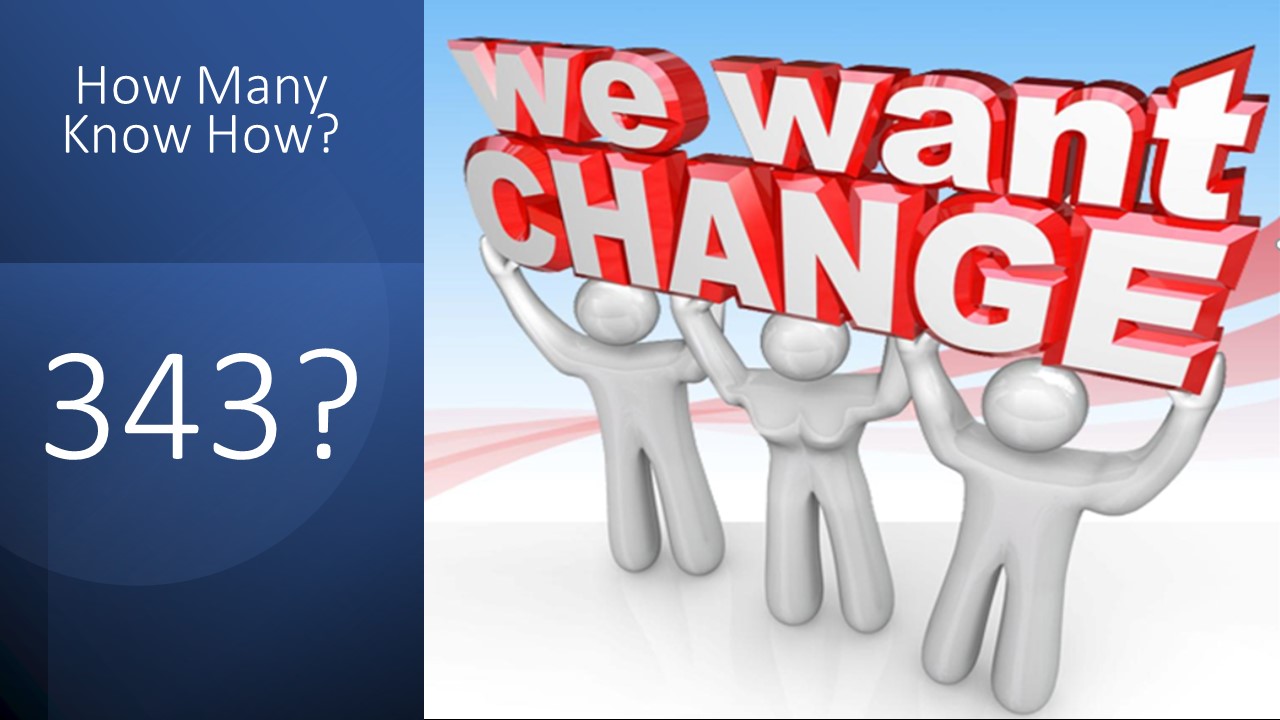 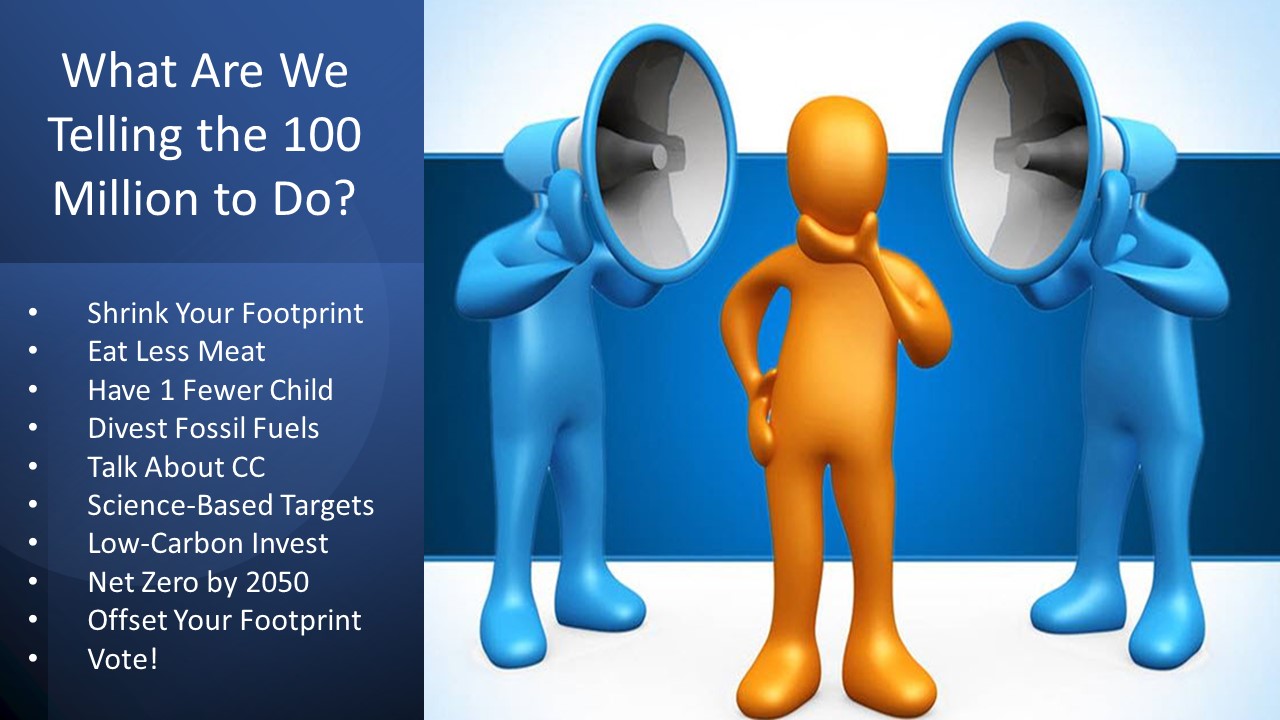 There is nothing wrong with many of these measures, but very few if any of them have any potential to scale to the needed level to advance climate change mitigation objectives on the basis of voluntary individual action. Talking about climate change, in the middle of the list, could be an exception, and it is probably the single most important thing individuals can do today in terms of the options readily available to them.

You might question this assertion, particularly with respect to the “Vote” bullet. Isn’t voting supposed to bring about collective action and systemic change? In theory, perhaps, but Katherine Gehl’s 2020 book “The Politics Industry: How Political Innovation Can Break Partisan Gridlock and Save Our Democracy” does a great job of explaining why voting today isn’t doing anything of the sort. It’s definitely worth reading, or you might want to take advantage of Episode 131 of The Realignment Podcast to listen to a great interview with the author. Podcast link here YouTube link here. In fact, getting involved with Gehl’s effort to advance Final Five voting and Ranked Choice voting in states around the U.S. might be the most important thing many individuals could do on behalf of climate change between now and the 2022 elections. Alaska become the first state to implement both measures in 2020 (albeit with only Final Four voting). 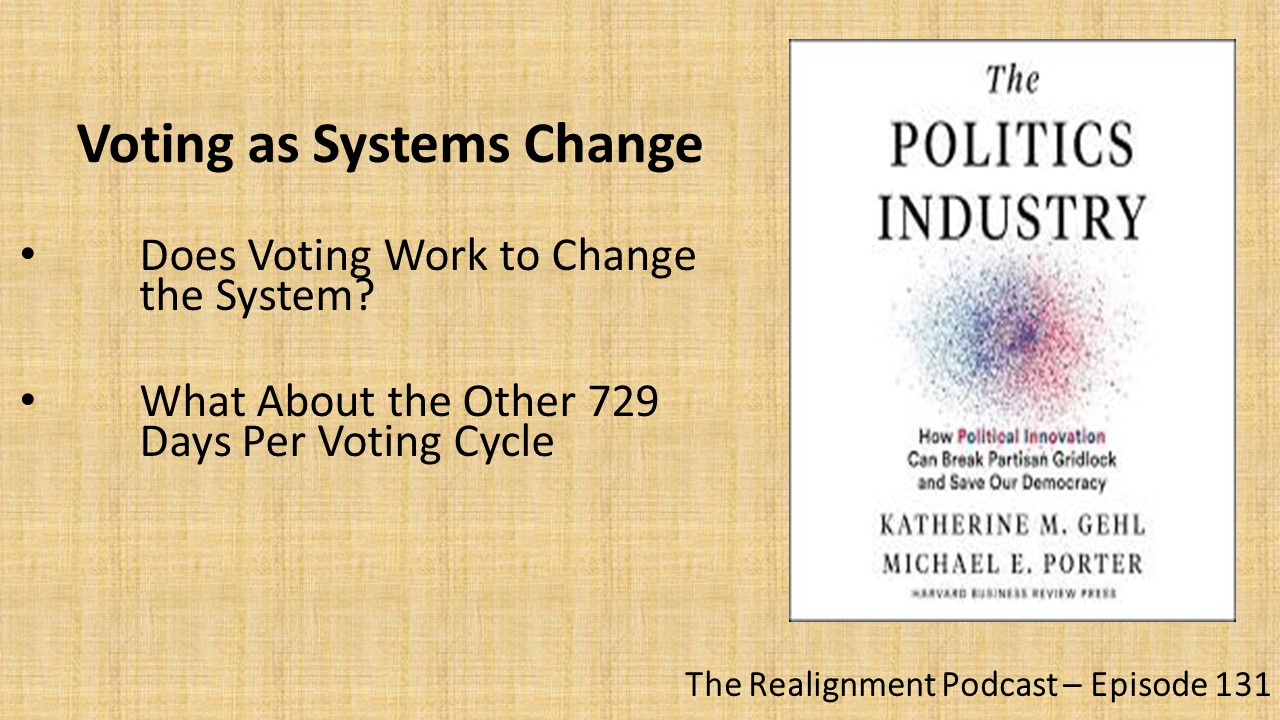 Before moving to Climate Chess as a vehicle for translating individual actions into collective impact, it’s worth pointing you to another recent podcast which did a very good job of exploring the topic of “individual vs. collective action on climate change. Podcast link here. Their solution for how individuals can contribute to collective action, however, leaves a lot to be desired. The responsibility for knowing the best things to do remains with the individual, and that just can’t work when it comes to solving a wicked problem like climate change. That’s why Climate Chess is necessary. 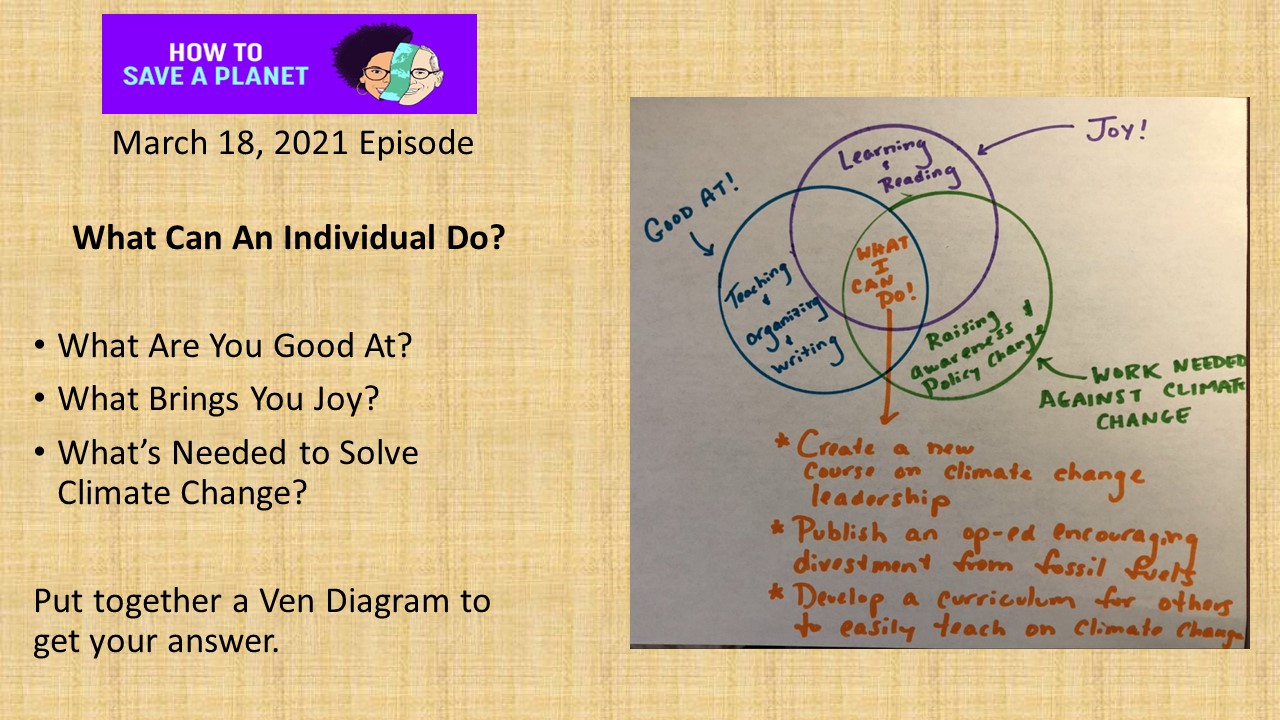